Public schools must provide students with an educational program that is “appropriately ambitious” and “reasonably calculated to enable a child to make progress appropriate in light of the child’s circumstances.”
Endrew F. v. Douglas Cty. Sch. Dist., 580 U.S. ___ (2017).

Imagine you are the principal at a public school. A student with a disability enrolls in your school. What services must the school provide? Do you have to ensure that the student achieves grade-level progress, is on track to gain self-sufficiency, and has opportunities similar to those given to children without disabilities? Or do you just need to ensure the student achieves some progress, no matter how minimal?

The United States Supreme Court (the “Court”) recently provided additional clarity for parents and school officials when they develop interventions for students with disabilities. While there is still room for interpretation, the Court’s guidance requires that schools provide students services that are “appropriately ambitious” given the severity of a student’s disability. The Court’s standard is higher than what many schools and districts were previously providing. Schools and parents should revisit their students’ interventions to make sure they comply with the new standard.

The Douglas County School District in Colorado (the “District”) faced just such a question when Endrew F. enrolled as a kindergarten student. Endrew has autism. The school district, as required under the Individuals with Disabilities Education Act (the “IDEA”), worked with Endrew’s parents to develop an Individualized Education Plan (“IEP”) intended to address Endrew’s unique educational and functional needs. The IEP was essentially rolled over every year through fourth grade. By the end of fourth grade, Endrew’s parents became worried that Endrew’s academic and functional progress seemed to stall but the District proposed no new interventions. Instead, the District proposed a similar IEP for fifth grade.

Endrew’s parents had their worries validated when they enrolled their son at Firefly Autism House, a private school specializing in education for children with autism. Endrew began to make substantial progress. His parents asked the District to implement some of the behavioral interventions that were working for Endrew at Firefly in Endrew’s prior public school. The District essentially refused.

Under the IDEA, if a public school district fails to provide proper services to a student with disabilities parents may seek reimbursement for the cost of seeking those services elsewhere. When the District refused to provide additional interventions for Endrew his parents sought reimbursement from the District for the cost of sending Endrew to Firefly. The District refused and the issue wound its way through the courts.

The IDEA requires school districts to provide every student with a free appropriate public education, or FAPE, in order to receive certain funds. The dispute between Endrew’s parents and the District came down to their definitions of what constitutes a FAPE. The District argued that it was only required to provide services to Endrew that allowed him to receive some educational benefit – a minimal standard. An administrative law judge, a district court, and a court of appeals all agreed with the school district. Each ruled that so long as Endrew was making some progress, the District met its burden under the IDEA. 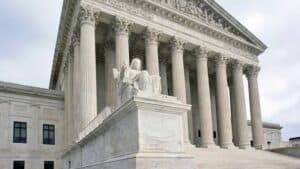 The Supreme Court disagreed with the lower courts. In a unanimous decision issued on March 22, 2017, the Court rejected the District’s argument that any level of progress was sufficient. Without creating any bright-line rule, the Court stated that a child’s IEP “must aim to enable the child to make progress” and “must be appropriately ambitious.” The Court declined to adopt a more ambitious standard proposed by Endrew’s parents, which would have required school districts to provide “an education that aims to provide a child with a disability opportunities to achieve academic success, attain self-sufficiency, and contribute to society that are substantially equal to the opportunities afforded to children without disabilities.”

So how does a school district decide what is appropriately ambitious? The Court seems to say that each child with a disability must be viewed on a case by case basis. Schools should design ambitious plans based on a disabled student’s unique strengths and challenges without benchmarking their progress against children without disabilities. School officials must be able to offer a “cogent and responsive explanation” for their decisions related to the IEP.

In order to comply with the Supreme Court’s ruling, schools and districts should begin to review their IEP procedures. IEP teams should consider not only whether a student has made progress under their current and prior IEPs, but how much progress the student is reasonably capable of achieving in light of the student’s circumstances.

While the implications are not yet clear, the Supreme Court’s ruling is likely to invigorate parents and advocacy groups that seek additional services for children with disabilities enrolled in public schools.