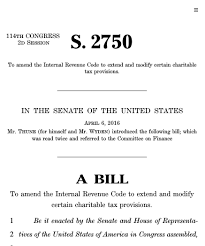 1. Contributions up to $100,000 per year made from an IRA to a Donor Advised Fund would be tax-free.

The IRC currently allows an IRA owner who is at least 70 ½ years of age to contribute up to $100,000 per year from an IRA to certain public charities (excluding donor advised funds and Type III supporting organizations) without paying tax on the distribution. The contribution may be counted toward the IRA owner’s required minimum distribution for the year. However, in order to avoid conferring a double benefit, the IRA owner is not allowed to take a charitable deduction for the amount contributed. This provision of the tax code is commonly referred to as the IRA Charitable Rollover (the “Rollover”).

The proposed CHARITY Act would extend the Rollover to include contributions made by IRA owners to donor advised funds (DAFs). In recent years, the popularity of DAFs has risen to astonishing levels. The National Philanthropic Trust released a report in November 2015 revealing that 1,016 donor advised funds held $70.7 billion in assets at the end of fiscal year 2014. This concentration of charitable funds has generated vigorous debate among those in the philanthropic community regarding how these giving vehicles are best utilized and regulated to further charitable missions.

The Act would require DAF sponsors that have an official policy on inactive or dormant advised funds to describe the policy and include a copy with the sponsor’s annual informational return. An inactive fund policy typically explains that if there are no contributions made to the fund or recommendations made regarding distributions from the fund for a certain number of years (often 2-5 years) then the fund terminates and the balance is transferred to the DAF sponsor.

In addition, sponsors would be required to calculate and disclose the percentage distributed from all DAFs collectively during the current taxable year, as well as the average payout over the most recent three-year period.

Supporters of the bill argue that extending the IRA Charitable Rollover to DAFs will make it easier for community foundations and other public charities to maintain DAFs and further their charitable missions.

2. The excise tax on private foundation investment income would be reduced from 2% to 1%.

Under the IRC as currently enacted, a private foundation (including any disqualified person) that holds more than 20% of the voting stock of a corporation, the profits interest in a partnership or joint venture, or the beneficial interest in an unincorporated enterprise, is liable for an excise tax in the amount of 10% of the value of the excess business holding.

The CHARITY Act would create an exception to the excess business holdings tax for certain philanthropic businesses. In particular, the tax would not apply if a foundation could show that: (1) the foundation holds all ownership interests in the business having received such interest by will or trust upon the donor’s death; (2) that all net operating income is distributed to charity within 120 days after the close of the taxable year; and (3) that the business is operated independently from the foundation.

The independent operation requirement looks at whether any board member of the foundation or substantial contributor to the foundation (or a family member) has a financial relationship with the business. In practice, this provision creates a way for certain businesses to give 100% of after-tax profits to charity without incurring a tax-penalty.

4. Would allow the Treasury Department to regulate the standard mileage tax deduction rate for providing volunteer services to charity using a personal vehicle.

A taxpayer may deduct a certain amount, expressed in cents per mile, for miles driven in a personal vehicle while conducting certain activities. Deductible activities include business travel, use of a vehicle for medical care, as part of a move or for use in rendering volunteer services to a charity.

The CHARITY Act would authorize the Treasury Department to adopt regulations tying the standard mileage tax deduction rate for providing volunteer services to charity to that of medical or moving activities. This would allow for increases in the rate in future years absent for the past eighteen years.

Under current law, tax-exempt organizations with annual gross receipts less than $50,000 may be required to submit notice 990-N electronically with the IRS. Also, an organization with $10 million or more in total assets may be required to file Form 990 electronically if the organization submits at least 250 returns with the IRS within a given year. The CHARITY Act would require all tax-exempt organizations that must submit Form 990 to do so electronically. The purpose of this provision is to increase transparency and accuracy and reduce the potential for tax identity theft and fraud.

The CHARITY Act is currently being reviewed by the Senate Finance Committee.  Many political analysts do not expect the bill to pass this year. However, at the very least, its introduction begins a conversation about the place of tax-exempt organizations and the charitable deduction within our system of taxation in advance of the push by many in Congress for comprehensive reform of the Internal Revenue Code.

In Conclusion – “Sense of the Senate”

Momentum for comprehensive reform of the IRC has been simmering in Congress for some time now. Many legislators have suggested changes including, in some cases, substantial changes to the Code. There are many items in the Code that benefit the philanthropic community, but none as directly as the deduction for charitable contributions.

The CHARITY Act begins with a resolution stating “it is the sense of the Senate that encouraging charitable giving should be a goal of tax reform and Congress should ensure that the value and scope of the deduction for charitable contributions is not diminished during a comprehensive rewrite of the tax code.” The bipartisan support shown for this bill is encouraging for the philanthropic community and the sense of the senate resolution strikes the right tone for any future discussion on tax reform.